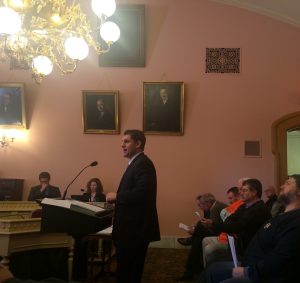 ACT Ohio Executive Director Matt Szollosi testified again yesterday in the Ohio House of Representatives Insurance Committee, in opposition to House Bill 394 (“HB 394”).  Szollosi’s testimony focused on how this legislation would harm both skilled construction professionals and the contractors they work for.

HB 394 was introduced under the premise that Ohio needs a solvent unemployment compensation fund.

Ohio’s unemployment fund is funded by employers. Over the years, the majority of states have kept up with inflation in determining the amount of employer contribution. Ohio has not, with employers paying state tax on only the first $9,000.00, unchanged since 1995.  HB 394 proposes an increase in this state tax level to an amount of $11,000.00, which is still behind thirty-four other states in the amount employers have to pay. This increase would last until the fund reaches a minimum safe level, when the required payment will then revert back to the $9,000.00 threshold.

This lack of inflationary adjustment in Ohio contributed to not having enough monies in the fund when demand radically increased as a result of the great recession of 2008. During this turbulent time, Ohio borrowed money from the federal government. Currently, Ohio still owes about $773 million dollars. However, the state is on a budgeted plan to pay this money back by this year. The issues of the prior federal debt and the need for a future solvent fund cannot be conflated. HB 394 deals exclusively with the future of the fund, not past debts.

Some would understandably argue that HB 394 takes fiscal responsibility off the shoulders of employers and shifts it to workers, in the form of benefit reductions to account for what proponents of HB 394 (like Doug Holmes, a Washington-based consultant who testified on behalf of the Ohio Chamber of Commerce and other business groups), repeatedly refer to as “balanced” approaches.

In his testimony, Szollosi made clear that the objective of the current bill was to address the future solvency of the unemployment compensation fund, and not to address the current negative balance of the fund as some proponents have argued.

Additionally, Szollosi pointed to the specific portions of the amended HB 394 that still do not take into account the construction industries delicate position. More specifically, the number of weeks of benefit eligibility, the dependency classifications, the additional waiting week, and the earnings requirements for eligibility.

The bill proposes 12 weeks as the maximum to receive unemployment, with the potential to slide to 20 weeks in times of serious economic distress. However, the nature of the construction industry requires the current 20 to 26 week model in order to maintain a strong workforce. This is due to construction’s ties to seasonal weather and the overall health of the economy.

If these drastic cuts to the weeks occur, there will likely be an exodus from the industry and many workers will not return. This would be catastrophic for an industry that is already pressed for skilled workers and would make it extremely difficult to recruit new individuals into the industry.

The bill proposes to eliminate the dependency classifications in unemployment benefits and establish one rate, at the lowest rate available. Therefore, someone with three children will receive the same amount as someone single with no dependents.

In addition to this cut to benefit weeks, there is also a provision in HB 394 that will require workers who are laid off more than once a year to lose a week of benefits each time they requalify. This will discourage construction workers from taking “short calls,” as they may work on one of these projects for a week or two, and after completion would then have to wait a week for benefits after they requalify. This provision will drastically harm construction contractor’s ability to meet the needs of their customers by discouraging workers from taking these short term jobs. Only one state, North Carolina, has such a draconian policy.

Lastly, the bill also proposes a requirement that workers work in at least three different quarters of the year to qualify, in addition to the current requirement that the worker work 20 weeks during the year. No other state has this quarter policy. While this may not seem to be a rigid requirement in most industries, construction is different.

Executive Director Szollosi concluded with discussing how such measures will impact recruitment and retention in the construction industry, as these policies are not conducive to maintaining a robust workforce. No questions were asked at the end of his testimony.

ACT Ohio will continue to monitor this legislation and will post updates as information becomes available.