The International Brotherhood of Boilermakers 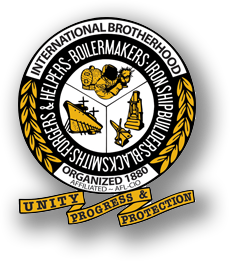 The Boilermakers union grew out of the Industrial Revolution and the demand for steam power. Organized in 1880, they are one of the oldest unions in the United States. They are headquartered in Kansas City, Kansas (since 1893) and have more than 200 Locals across North America.

Their highly-skilled members have built nuclear, gas-fired, and advanced coal-fired power plants, as well as military ships – including various classes of submarines. Boilermakers helped construct the U.S.S. New York amphibious transport dock (launched in late 2009), which includes steel from the Twin Towers. They also helped build the world’s first nuclear submarine, the U.S.S. Nautilus. Boilermakers from Pennsylvania crafted the structural sections of the Gateway Arch in St. Louis (which includes 900 tons of stainless steel—more than any other project in the world at the time it was built). And it was their members who manufactured the aluminum-based fuel for the Space Shuttle’s solid rocket boosters.

The Boilermakers have played a key role in history. They built machinery to construct the Panama Canal and thousands of ships to help win two world wars.

They are a progressive, forward-thinking union that has established national funds for pensions, health and welfare, and an annuity trust. The Boilermakers partner in an award-winning alliance with construction industry contractors and owners that has resulted in numerous union/management innovations for improved safety, manpower availability, training and cost savings.

The Boilermakers union has long been politically active, with a permanent presence in Washington, D.C. They aggressively promote and defend the rights of their members and indeed those of all workers.