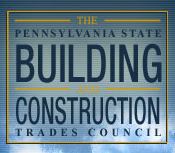 The Pennsylvania State Building & Construction Trades Council is made up of 16 Regional Council and more than 115 local unions from 15 International Building Trades Unions.

The Pennsylvania State Building & Construction Trades Council and its affiliated members support and provide training to their members in order to provide the best and safest trained workforce.

Safety training helps the worker identify possible hazards and prevent on-the-job accidents. By providing the best safety training, Contractors and Unions strive to insure that workers are able to earn a living and return home each day uninjured.

Many of the Building Trades Local Unions have adopted and incorporated the OSHA 10 hour Safety Training Course or the Building and Construction Trades Departments “Smart Mark Safety Training” modeled after the OSHA 10 hour training into their Collective Bargaining Agreements and Apprenticeship Training Programs. A workforce that has been provided the proper safety training focuses on the prevention of accidents. Safety training also helps the contractors keep their Experience Modification Rates (EMR) low, thus enabling them to competitively bid on projects that would otherwise keep them off a bid list, plus reducing their workers compensation premiums.

One of the top priorities identified in Pennsylvania and around the entire country is the growing demand of highly trained and skilled workers in the construction trades.

In order to promote training and recruitment into registered apprenticeship programs to meet these demands, the Pennsylvania State Building & Construction Trades Council promotes the use of Pre-Apprentice Training Programs, developed by the Building & Construction Trades Department Joint Apprenticeship Training Committee, in public and private schools. This will give many students the preparation they need to enter into the apprenticeship programs in the construction trades and help lower the high numbers of students that choose to drop out of school. Due to the increased cost of a college education, many students that graduate high school never plan on attending college.

Apprenticeship training is the best way to provide a highly skilled and trained workforce in the construction industry. Apprentices that participate in a program registered with the United States Department of Labor are provided training in two ways. They get to work on a job for a participating contractor in order to receive credit for on-the-job training hours and they attend training classes related to the trade they have chosen. Most apprenticeship training programs are four (4) or five (5) years and as the apprentice progresses their pay increases. The training costs are provided by the apprenticeship program that is jointly managed by Labor and Management.

The Pennsylvania State Prevailing Wage law requires that all workers on state funded construction projects that exceed $25,000 be paid the State Prevailing Wage.  The Federal Government requires the payment of Prevailing Wages for all Construction Contracts that have federal funding that exceeds $2,000, which includes federal, state and local public works projects. The Federal Davis/Bacon Act was signed into law by President Hebert Hoover in 1931 and amended in 1935 with wage conditions and amended again in 1964 to include the consideration of fringe benefits.

Organizing takes place when union “organizers” educate unrepresented workers to encourage them to join a union. The education phase can touch on workplace rights, wages, benefits and various other benefits of being a union member. A union organizer may visit unrepresented workers at their home or any other location outside the workplace to talk about the problems they face at work. The goal of a union organizer is to obtain a union contract between the employer and employee which ultimately provides for better working conditions.

Why Join a Union?

There may be no better reason to join a union other than the fact that union membersâ€™ wages are 28% higher than non-union workersâ€™ wages. It is not uncommon for non-union workers to earn $8 an hour, have no health insurance, and no pension. Public assistance programs funded by taxpayers make up for what employers should be paying, but are instead pocketing. Of course, corporations and private businesses have the fundamental right to make a profit….it is part of the American Dream. But some CEOs can earn 500 times the wages paid to their workers, and this greed is contributing to the demise of the middle class.

In 1935, the United States Government enacted the National Labor Relations Act which grants employees in the private sector the right to form labor organizations and bargain collectively without the interference of employers. There is no denying that there is power in numbers, and such strength gives an edge to employees when it comes to setting the terms and conditions of their employment.