A Cleveland contractor indicted by a federal grand jury has research IBEW Local 38 and ACT Ohio to thank.

Marcus Butler, owner of L& B Electric of Northeast Ohio, was indicted for violating the federal Davis-Bacon Act and paying criminally low wages to employees. He faces 61 counts of making false statements to a government agency. Prosecutors say Butler lied on tax forms between 2011 and 2013, claiming to have paid his employees $126,514.80 more than he actually had. The specific rate of pay employees received was not specified, yet the indictment called it “substantially less,” than required by law.

The underpaid employees performed electrical work at three apartment buildings owned by the Cuyahoga Metropolitan Housing Authority. This work was part of a federally-funded project, as the CMHA receives money from the Department of Housing and Urban Development. Under the federal Davis-Bacon Act, employers working on federal projects are supposed to pay their workers a certain rate, known as the prevailing wage rate.

This investigation began due to efforts of the International Brotherhood of Electrical Workers, Local 38 of Cleveland, Ohio (IBEW Local 38). Officers of IBEW Local 38 began by comparing payroll checks to certified reports submitted by L&B Electric to the CMHA. After the discrepancy was discovered, a prevailing wage complaint followed and the investigation was underway.

ACT Ohio would like to congratulate our brothers and sisters at IBEW Local 38 for their hard work and efforts in bringing this injustice forward and standing up to protect Davis-Bacon and fair construction wages.

Letter to Editor corrects false claims made by ABC 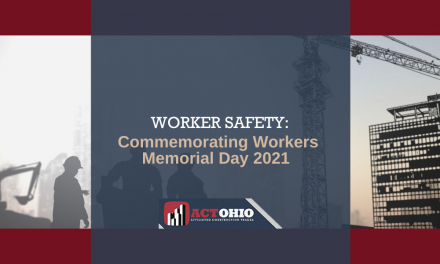 How You Can Protect Ohio Workers this Workers Memorial Day