As demand for new infrastructure grows in Ohio and nationwide, the demand for skilled labor also rises. According to a recent survey of 1,358 contractors nationwide (26 contractors in Ohio), 86% were having trouble filling positions with qualified workers, which is a 3% increase from last year.

Of the Ohio contractors, 95% said they were having trouble filling positions. As a result, many have increased base pay rates and benefits in an effort to attract talent. Some contractors are attempting to offer their competitors workforce additional compensation to work for them instead.

When the real estate bubble exploded in 2008, many workers lost their jobs and were forced to work in other industries. The Census Bureau reports that about one-third of these former construction workers found positions in other industries and some simply reached the age of retirement. This coupled with more young people pursuing two or four-year college degrees creates less bodies to feed this need. According to the National Education Association, since 1990 there has been a steady decrease in the amount of vocational training programs offered in high schools. This lack of training and awareness of building trade career options, has also contributed to fewer young people filling these roles.

The shortage of skilled laborers has drove up housing costs and effects building time which impacts how many projects are completed. According to the Home Builders Group new home prices have increased 5.7% on average over the past year.

In Columbus, there has been a push for new infrastructure growth in the downtown area. The city has made it a priority to increase the number of residents in the city center reflected in the cities strategic plan. This population has increased from 3,500 in 2000 to 7,471 at present. The Columbus Dispatch reported that downtown has 21 projects under construction, valued at $362 million.

With all this emphasis on growth and expansion the skilled trades are more valuable than ever. Collectively, the building trade’s members spend over $38 million annually on training and apprenticeship programs to train the next generation of highly skilled construction professions.  According to the Ohio Apprenticeship Council, the state regulatory agency for apprenticeship programs, there were over 7,000 registered students in union affiliated programs.  These students represent 79% of the all registered construction apprentices in Ohio. 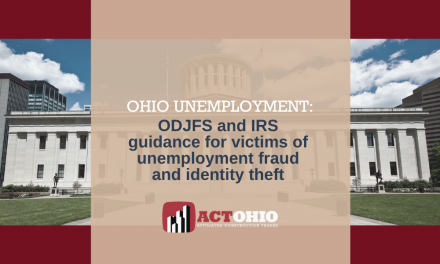 Are You The Victim Of Unemployment Fraud?