In a proclamation dated August 30 declaring September 2 as Labor Day, President Obama praised the spirit and productivity of American workers and recognized the role unions have played in workers’ well-being.

America is what is today because workers began to organize – to demand fair pay, decent hours, safe working conditions, and the dignity of a secure retirement. Through decades upon decades of struggle, they won many of the rights and benefits we too often take for granted today, from the 40-hour work week and minimum wage to safety standards, workers’ compensation, and health insurance. These basic protections allowed the middle class to flourish. They formed the basis of the American dream and offered a better life to anyone willing to work for it.

President Obama also pledged, “In the years to come, I will continue to support collective bargaining rights that strengthen the middle class and give voice to workers across our Nation. And I will keep pushing for a higher minimum wage — because in America, no one who works full-time should have to live in poverty.” Read the full proclamation here.

Labor Secretary Thomas Perez noted that “unemployment is at its lowest level since 2008” with 7.3 million jobs created in the past 41 months in his own statement issued August 30 to commemorate Labor Day. He said the Department of Labor is also fighting to raise the federal minimum wage and “investing in higher education and working closely with employers to provide workers with the state-of-the-art skills they need to succeed in 21st century jobs, making sure workers come home safely to their families at the end of every day.”

ACT Ohio commends both President Obama and Labor Secretary Perez on their commitment to creating jobs and defending the protections that union labor provides for workers. 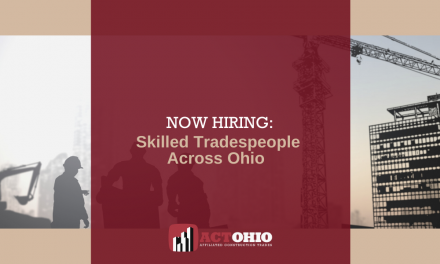