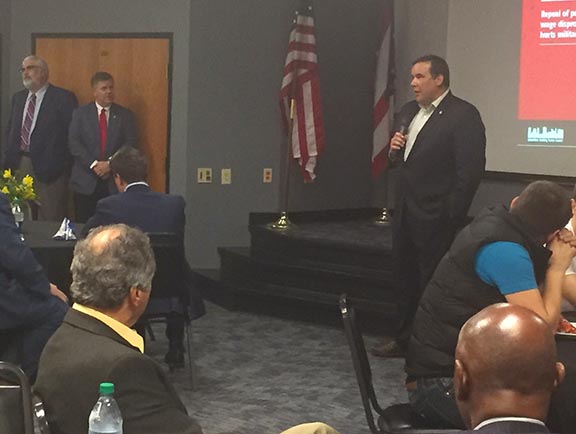 The Columbus/Central Ohio Building Trades hosted an Open House on April 19. The event, which highlighted Ohio’s apprenticeship programs and the opportunities they provide, was hosted at the Columbus Electrical Trades Center. Columbus Mayor Andrew Ginther spoke to those gathered to reiterate the city’s commitment to the Building Trades.

Columbus Mayor Andrew Ginther spoke to those gathered to reiterate the city’s commitment to the Building Trades. “There are many paths to the middle class,” said Ginther, “and the Building Trades are a great option, and provide that path. They play a part in helping Columbus become America’s Opportunity City.”
man capital is huge,” said Lipster. “You’d have to look to the US Armed Forces to see another organization that invests as much.”

Lipster noted that Ohio has built the second largest apprenticeship system in the United States – and that is no accident, he said. “Apprenticeship programs create the employees that employers are looking for.”