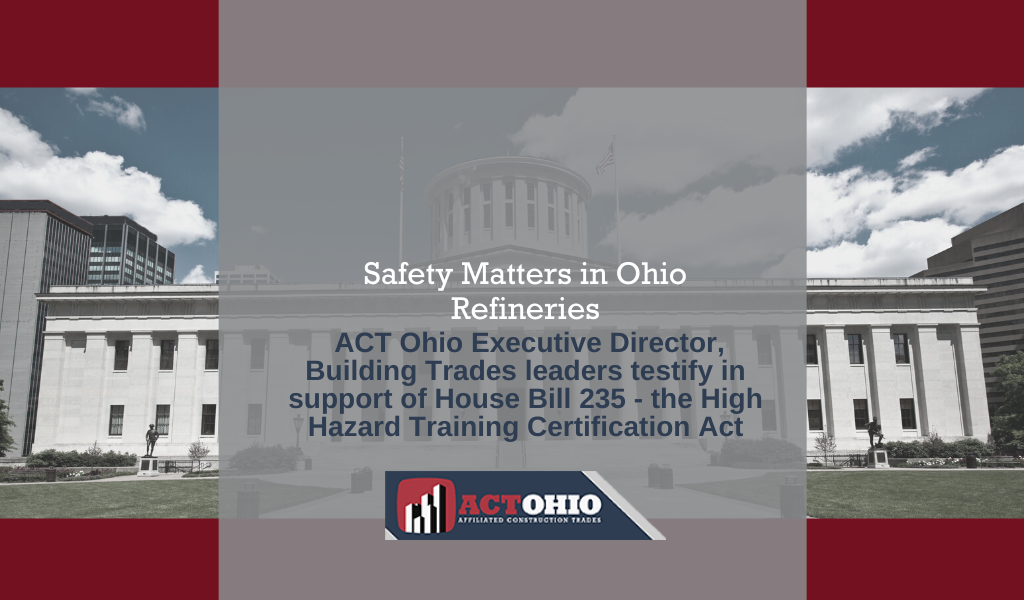 ACT Ohio Executive Director Matt Szollosi testified in support of House Bill 235 today, along with Michael Bertolone, Business Manager for the International Union of Operating Engineers Local 18. A lobbyist for the national Americans for Prosperity agency laid out the Koch Brothers’ opposition to the safety bill: That requiring construction workers in Ohio refineries to possess basic construction safety and skills training would increase labor costs and decrease the control of large global oil companies like BP and Husky/Cenovus in Ohio’s most hazardous refining facilities.

Please be advised that the Affiliated Construction Trades Ohio Foundation (“ACT Ohio”) is a 501(c)(5) organization created to facilitate economic and industrial development opportunities, and to promote industry-best practices for Ohio’s public and private construction.

ACT Ohio currently has 137 local affiliates across the state, who in the aggregate represent more than 95,000 building trades members. ACT Ohio has invested hundreds of thousands of dollars to promote careers in construction to Ohioans of all ethnic and socio­-economic circumstances. We are aggressively recruiting the best and the brightest to seek an apprenticeship and develop skills that can sustain a family. We strongly support the concept of getting young people, minorities, females and veterans involved and interested in Ohio’s construction industry.

The risks inherent in construction are substantially higher in high hazard facilities that handle dangerous materials or substances insofar as unsafe work practices may cause explosions, chemical spills and other hazardous conditions, which may expose workers and the public, especially populations in nearby communities, to dangerous conditions that can lead to serious bodily injuries and death.

There are four oil refineries in Ohio:

For purposes of House Bill 235 it is important to note the distinction between the refinery’s full-time workforce and the external construction workforce brought in for projects.

The external construction workforce is employed by contractors and sub-contractors hired by the refinery for projects that are typically very short in duration because refineries lose millions of dollars for each day they are not in production. It is not uncommon for a large facility shut down or turnaround to last 30-40 days and involve upwards of 2000-3000 construction workers to be brought on site just for that period of time. “Partial” shutdowns also occur with more frequency – these are instances where only a portion of the refinery is shut down for construction work while the remainder of the facility remains on-line. By all accounts, with this many construction workers brought in for such a short period of time, the refineries invest in absolutely no training for the external construction workforce. This is why the enactment of HB 235 is necessary.

The bill does not include the full-time workforce/employees of the refineries – only the contracted for construction workforce brought on site for capital improvements/maintenance + shut-downs and turn-around projects.

Craft Labor Standards: To ensure that contractors/subcontractors have sufficient capabilities, they must comply with the following craft labor workforce standards:

Classification A: This standard is for construction workers (union or non-union) that have graduated from ANY STATE OR DOL APPROVED apprenticeship programs (this includes currently registered apprentices).

Classification B: This standard is for those workers (union or non-union) that have not graduated from an approved state or DOL approved apprenticeship training program. It requires that workers must have at least 10,000 hours of prior experience in the trade in which they are employed on the project.

Thus, all workers on the project who do not meet the Class A Training Requirement must meet this Experience Requirement.

SAFETY Requirements: All construction workers subiect to the Act-regardless of which of the above credentials they meet-must also show completion of 30-hour course in safety and health hazard recognition and prevention approved by the occupational safety and health administration (OSHA) of the U.S. Department of Labor.

Why the emphasis on Classification A workers? Per House Bill 235:

Apprenticeship training is a system in which workers are fully trained through organized, formally registered apprenticeship standards, designed in accordance with established quality, safety and performance standards approved and monitored by the U.S. Department of Labor and state labor agencies, including the Ohio Department of Job and Family Services.

In order to be approved under applicable federal regulations, an apprenticeship program must have an organized, written plan that contains provisions addressing “safety training for apprentices on the job and in related instruction” in addition to numerous other standards for acquiring critical skills in a given trade. Apprentices receive a combination of extensive on-the­ job training, combined with classroom and shop instruction, and must pass specific skill-level tests after each year before they can proceed to the next year in programs that typically involve a 3 to 5 curriculum. See 29 C.F.R. 29.5.

In educating workers in the construction industry, the training used to develop skills in the respective trades is inextricably linked to safety training since performing many functions or tasks safely requires that the work be done correctly. Executing tasks in construction properly also requires that they be ca1Tied out in accordance with a number of complex industry codes and standards. A skilled workforce is essential to safety, productivity and sustainability of construction and maintenance activities. Conversely, the use of workers with inadequate training can seriously unde1Tnine project safety. When a project is executed by less qualified craft workers, increases in human enors, less familiarity with safety procedures and legislations and inadequate safety training will be the factors that adversely influence safety performance.

Finally, as set forth by the United States Department of Commerce and Case Western Reserve University in The Benefits and Costs of Apprenticeship: A Business Perspective (2016) apprenticeship programs are widely supported by contractors and other employers as highly cost-effective due to higher productivity of trained workers, improved safety, improved project quality, more reliable project staffing, and reduction in employee turnover.

According to the U.S. Department of Labor, currently in Ohio there are:

For clarification, nowhere in House Bill 235 is there a requirement for “union” apprenticeship programs. While I personally believe our programs to be the best, we certainly do not have the most.

The U.S. Depa1tment of Labor, Occupational Safety and Health Administration (OSHA) found that, since the agency began monitoring safety management at these facilities in 1992, “no other industry sector has had as many fatal or catastrophic incidents related to the release of highly hazardous chemicals … as petroleum refining….” See Occupational Safety and Health Administration, OSHA 3918-08 2017, Process Safety Management for Petroleum Refineries (2017).

Petroleum refineries also have experienced numerous fatal and/or catastrophic process-related incidents since 2010, including the following cases:

Based on the enforcement data, feedback from OSHA personnel and the continuation of a large number of significant petroleum refine1y incidents in the U.S., OSHA has issued this instruction that outlines a modified CHEM NEP that will include petroleum refineries and will be launched OSHA-wide.

Further, a review of the most recently available OSHA data reveals that unacceptable levels of risk persist in this sector. Specifically, there has been a recent surge in “serious” OSHA safety violations at petroleum refineries-an increase of 78% in 2019 over the previous year. Federal law defines a “serious” safety violation as one having a “substantial probability [of causing] death or serious physical harm” that an employer knew or should have known to exist. Section 17 of the “Occupational Safety and Health Act of 1970,” 29 U.S.C. 666.

These findings, along with incidents that have occurred more recently all lead to the conclusion that the reasonable, narrowly tailored approach outlined in House Bill 235 represents good public policy.

Accordingly, I strongly urge the House Commerce & Labor Committee to favorably report House Bill 235. Thank you for your consideration and I would be happy to take any questions.